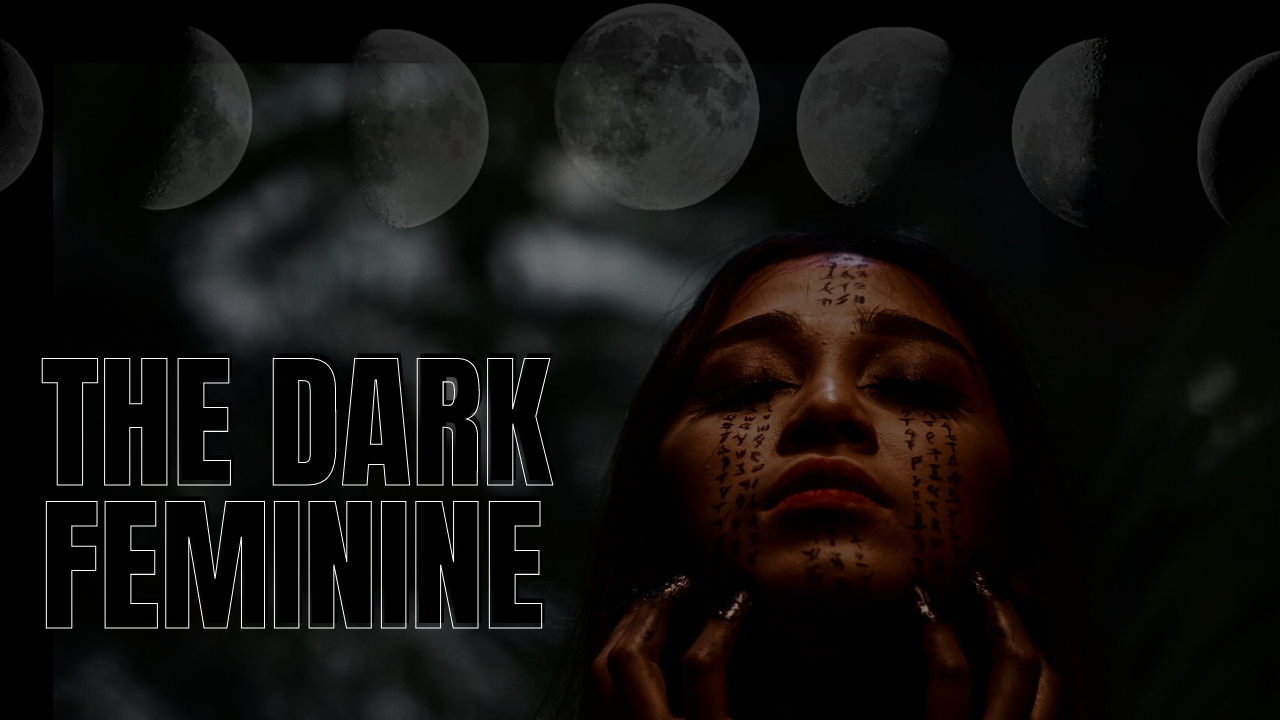 Hello, my friend! In this article, I want to dive into the DARK FEMININE!

So many people are terrified of the dark feminine, which is nothing but an aspect of what we know as feminine energy. For example, we have Goddess Kali Ma. Check out the video of my experience with her here>> She’s f*cking terrifying, huh? Her blue skin, tongue sticking out, etc. It’s for sure a sight to take in. But beneath all that which we perceive as “ugly,” lies immense beauty, vulnerability, magic, creation.

The Dark Feminine is…

Feminine energy is the negative polarity, darkness, the moon, the void. It is the feminine, in her raw essence, that creates chaos but only to enable creation. The old must always be destroyed before the new can be created. You cannot lay down a foundation in an already existing building, at least not a foundation that holds a different vibration. You have to tear that b*tch down! Now, is the new creation better than the previous one? It’s all relative. I truly believe there is no good or bad. It all simply is. So all creation is indeed beautiful, equally meaningful and powerful. There is reason for everything.

The Wild. The Untamed.

The feminine is flow, movement, and oddly enough, stillness. All at the same time. She is unpredictable. And my friend, if you are a man reading this, she too lives within you. Allow her to support your masculine essence. Allow her to love and nurture your soul.

Something I share in the video (linked above) is the rejection society/humanity has of the shadow, darkness, chaos. What I personally feel is that, this rejection of the negative polarity, is the unconscious rejection of the untamed, dark, wild feminine. So not only has the feminine been casted out by, for example the patriarchy, but by us. We have grown to reject the shadow within and without, so the feminine, the negative polarity has become unhinged because there is no harmony. Everyone wants to be in the light, but the shadow also has wisdom. There is so much to learn in the underworlds of the unconscious.

Now, is the shadow bad? Is the underworld hell?

No. But this is only my perspective. Actually, I guess? Yes? Let me explain…

Our belief creates the reality we experience. And so, if you believe in the devil, evil or hell, this automatically makes it a reality. Now, if you’re like me, and you hold a more neutral perspective, good and evil become ONE. We are able to see that everything in this and all universes is energy/vibration and this energy/vibration has layers of low and high density. Even though something can be perceived as good or bad, it all is part of the whole. And because we understand this, we are no longer afraid. So it all becomes ONE. We embrace it all with compassion and learn as we go.

Before ending this conversation, I want to share a bit about powerful shadow Goddesses. Why? Well, because they are often seen as evil, and I want to bring in a higher perspective.

I briefly talked about Kali at the beginning, but here’s a little bit more about her. I will be diving deeper in a future blog, so stay tuned. Or you can watch the video I shared earlier.

Kali Ma is the Hindu Goddess of Destruction, Liberation, Death, Rebirth, and Transformation.

Kali is often depicted as a demonic looking woman with blue skin. But what I’ve realized after connecting with her is that she is a reflection of our shadow, our fears. When she first came into my auric field, I was terrified. It felt like I was experiencing connection with a demonic entity, but the more I calmed down, the more I embraced myself, the light, the shadow, the pain, the love, the more I began to see Kali as who she truly is. Her appearance changed. She became a beautiful reflection of my own light. She is nurturing, loving, compassionate. The mother.

Lilith, just like Kali Ma, is also seen as a demonic figure, shocker! lol She is known as the first wife of Adam. According to religious scriptures, Lilith was exiled from the Garden of Eden because she refused to submit to him. Girl was doing her thing, embracing her sexuality, she was a badass! And this is the raw feminine. The chaotic feminine. Feminine energy is meant to flow, to be free so that it can create. Lilith wanted to experience more than the “life” offered by Adam and so was exiled. I’ll dive deeper into her story as well, but she’s another feminine archetype that has been portrayed as pure evil. And why? Well, ’cause she was doing her thing. She used her voice. She was self-empowered.

Wife of Hades and Queen of the Underworld.

Goddess Persephone represents both innocence (light) and shadow (darkness). I do have to say that her story is f*cked up, again, I’ll dive into her in a later post. But, in short, Persephone was a beautiful young woman persuaded by God of the Underworld – Hades. He basically abducted her and tricked her into marrying him and staying in the Underworld by giving her a pomegranate.

According to mythology, the pomegranate is the fruit of the underworld, and her eating the pomegranate meant that she had to stay “underground” with Hades as his wife. Demeter, mother of Persephone, was not happy and so they ended up agreeing on Persephone living with Hades 6 months (fall and winter), and in-land with Demeter, the other 6 months (spring and summer). But I truly believe there is so much more and Persephone eventually learned to love Hades. She was the polarity he needed to harmonize his own distortion. More on this later.

Persephone is a Goddess that embodies both sides of the feminine. The nurturer. Innocence. Beauty. Vulnerability. And the shadow. The empowered badass b*tch! She shows us that we can be soft and sweet, and at the same time, self-empowered.

This is all I have for you today, my friend. If you enjoyed this, definitely sign up to my newsletter. You will received weekly empowerment messages, updates, and so much more. Also, new jewelry designs available! I have crescent moon designs channeling Goddesses. Kali Ma, Lilith and Persephone designs coming soon!