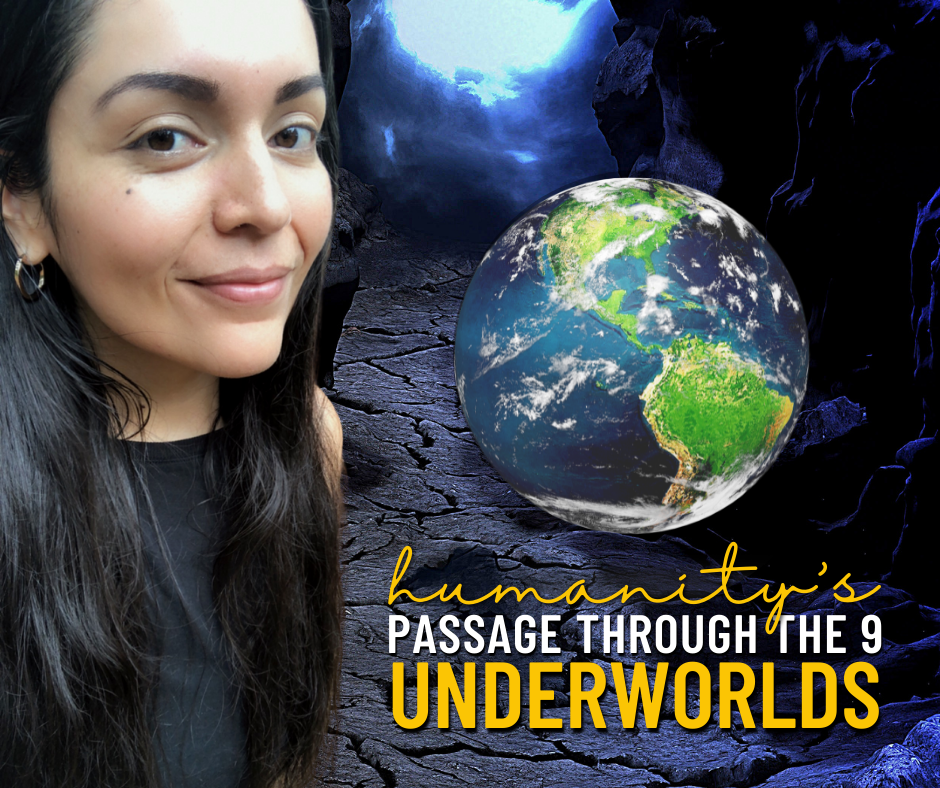 Most of humanity grew up with a very limited idea of what the underworld is, and all is very much fear-based. Religion, for example, tells us that the underworld is the realm of Satan and sinners, demons, fire. Scary shit! So in this article, I want to dive into what the Toltec tradition refers to as the 9 underworlds and their influence over humanity. My intention is to bring in perspectives that remove the fear from what we often perceive as evil.

The Toltecs, Mayans, and many other ancient cultures, used the term “underworld” in a metaphorical way to describe the place we all visit each night when we sleep or when we die. And honestly, the bible and other ancient scriptures are not meant to be taken literally. Most of the information we have now has been translated hundreds of times, and a lot gets lost in translation. This is coming from a bilingual person lol Also, language then is different than the language, the words we use now. It’s very hard to get an accurate translation of holy scriptures because the messages heavily rely on the level of awareness of the person translating them, or even the person writing them. It’s all dependent on our conscious awareness, openness, connectedness to the whole. We see things according to our already established beliefs. So seeing old scriptures as the ultimate truth is very limiting. Allow yourself to see and hear all perspectives.

“As our dreams create a large part of our waking experience, our underworlds are in fact places of creation. They are the places where we are forced to re-create ourselves, as they are the places where we face all our unresolved problems, our unconscious negative patterns, our inertia and self-destructiveness, our negative ancestral legacy, and our ‘Old Winds,’ our karma.” Sergio Magaña

According to Toltec Mexihca tradition, humanity has to go through a series of 9 underworlds as a collective during the transition from the Fifth to the Sixth Sun. Each underworld passage equals 1 year, but even once the year is over, the previous underworlds continue to hold great influence over humanity. And the influence remains until we open our eyes, awaken the heart, and EVOLVE, consciously rise above the trauma.

The Toltecs describe this as the underworld where humanity crosses from one river to the other. It is referring to the transition from the waking state to the dream state, from life to death.

During the transition from Fifth to Sixth Sun, we saw the rise in usage of cell phones, technology, the internet, and social media platforms. Slowly we have begun to shift our focus from an external experience to sort of an in-between stage that is not quite internal yet. Cell phones, for example, act as a barrier between the outer and inner worlds, it’s kind of like living through our phone’s screen. But with our passage through this underworld, humanity will be forced to cross the river and start looking in.

This is the underworld of two mountains divided by a path, and every time humanity tries to walk down the path created by the mountains, they move closer and closer together, crushing humanity, sending us all back to the beginning of the path.

This underworld represents the destructive patterns that humanity repeats over and over. Although we are past this underworld, it continues to heavily influence society. In order to cross the path of these two mountains, humanity must become conscious of these patterns and address them. We do this at an individual and collective level.

This is seen as a hill covered with obsidian knives. And every time we try to walk on this hill, the knives cut our feet.

Sergio Magaña describes this as humanity’s addiction to suffering. It’s like, every step we take, we hurt ourselves by holding on to things from the past or belief systems that cage our soul, resulting in limitations, anger, pain, frustrations. But there’s always a way out, and that way out is IN. The exploration of the inner world, the underworld.

This is seen as the place of freezing Winds where humanity is covered with a layer of ice that keeps us from moving. And as you all may know, movement and change are the only constants of this realm, of the Universe as a whole. We cannot remain frozen in memories or toxic behavioral patterns, for by the constant engagement with these lower density experiences and/or emotions, the individual and collective mind ceases to move, to evolve. We remain frozen in time. We get stuck.

Currently, we can see all the collective and personal toxic behavioral patterns arising within humanity to be addressed. Again, this is presenting us with the opportunity to rise. To see. To move. To change.

This is the underworld where fierce Winds blow a flag continually, nonstop.

“For the ancient people, strong Winds symbolized the influence of our ancestors. When they blew, we would face unresolved family issues or repeat negative family patterns, just as a flag flaps over and over in the Wind.” Sergio Magaña

Most of humanity walks the Earth fully unconscious of the energetic cord that ties us to our ancestors. It is through this energetic cord, through genetics and energetics, that we are individually and collectively handed down trauma from generation to generation. A lot of what you feel, what you are currently experiencing or trying to heal, is not yours. This is unresolved ancestral karma, ancestral trauma. And this underworld grants us the opportunity to pinpoint what it is exactly that we are working with.

Analyze the pain. What gives you anxiety? What are you afraid of? Dive deep.

This one sounds rough! Right? But again, it’s all a metaphor. We are asked to read between the lines, to see from a wider, more expansive perspective.

The wild beast represents the destructive emotions of the human. Anger, sadness, fear, frustration, jealousy, guilt, etc. In order to successfully move through this underworld, analyze your current emotional state. What are you feeling? Love? Fear? Anger? Once you know exactly what the emotion is, dive in deeper by figuring out the root of this emotion. Did someone do something to trigger this outburst? Okay, well, why is this a trigger? Did you experience something as a child that hasn’t been addressed? Dive deeper. Keep going until you pinpoint the root of anger, jealousy, fear, etc.

Humanity is haunted and wounded by arrows. Arrows in Toltec tradition represent our words. What we say to ourselves and one another.

“What do you use when you speak or think, flowers or arrows?” Question from the Mexican tradition.

In order to do our part with this underworld, one must be aware of the words we use to communicate with others. And this includes thoughts. What I am noticing at this time, I believe is connected to this underworld, is the sudden “wokeness” of society. I believe it’s great for everyone to be conscious of the words we use, but damn! What I see is overly sensitive people because of the unhealed personal and ancestral karma and trauma. If you say something that is not in alignment with the belief of someone, immediately you are bombarded with negative words. People ask for respect but when they don’t hear what they want to hear, immediately they disrespect you. It’s wild! But this is all part of the process. It is this desire for equality and respect that will make us all aware of the trauma that must be addressed in order to move forward with ease, without the need to fight someone that disagrees with our beliefs.

Instead of focusing on how other people communicate, the words they use, focus on yourself. Address what needs to be healed within yourself and, from that point, start move outwardly, speaking from the heart, and not from the wounded, egoic mind.

It still blows my mind how the energy of this underworld fully aligns with the COVID pandemic. Oh, and don’t forget about the US election! Jeez! What a year, right?

During this time humanity is faced with uncertainty. Suddenly, we know nothing. We rely on external power structures for answers, but even these people have no idea of what the hell is going on. And those who are aware of the true situation unfolding, speak only to fuel fear in humanity because that’s how they keep us under control. So, at this time, humanity can no longer rely on the media for answers and is forced to start diving deep within the self, but because we are so used to running away from emotions, from feeling, this deep dive only makes matters worst. We feel more lost. Trapped in our own underworld.

In order to move past this underworld of uncertainty, humanity must re-adjust its way of thinking and behaving. I see a lot of people, even now, refusing to dive into the unknown, the NEW, because of their attachment to what has been deemed “normal.” People are so uncomfortable adjusting to what the Sixth Sun is birthing because the Fifth Sun is what we are used to. Everything has been external for centuries. We are not comfortable living internally, feeling emotions, addressing trauma. But holding on to the “normal” is only going to keep you stuck in a cycle of suffering. What the Toltec tradition says is that those who refuse to change, to adapt to the energy of the Sixth Sun, will suffer greatly, there will be death. Both spiritual and physical. I’m not putting this here to scare you but to AWAKEN you. To help you. It’s all a matter of how humanity will go about handling this massive shift. It’s up to you.

According to Toltec Cosmology, this is the underworld in which humanity will, at last, find peace. This peace will come either through death or rest.

This is the underworld that grants us the opportunity to find peace through the acceptance of change. The previous underworld brought about situations that shook us up to the core in order to eventually find inner peace. This underworld, the 9th underworld, is the place in which, if we faced the trauma and allowed true healing to take place, we will finally start experiencing true inner peace. Now, the Sixth Sun began back on May 26th, 2021, during a lunar eclipse, but the energy of this underworld will continue to influence humanity until “the arrival of the New Fire on November 24th, 2026.” This is according to Sergio Magaña and Toltec tradition. This period will give us all the chance to work individually and collectively with the energy of the underworlds.

Each of the 9 underworlds shows up, one after the other, each reigning one year. But, the energy of each underworld simply surfaces within that period, shifting from the unconscious to the conscious mind of humanity. So even if we, as a collective, are moving through the 9th underworld, the previous underworlds hold equal power. And it is time, now, to become conscious.

Stay tuned for more posts about the Sixth Sun, Toltec Wisdom, the Extraterrestrial/Indigenous Connection, and more!

Hybrid Children: Diego (Healer & Teacher of the Way of the Heart)
I AM GOD | The ONENESS Perspective of God
Twin Flames and Soulmates - Spiritual Teachers
Was Jesus Christ a Mystic and Extraterrestrial?