LEMURIA AND ATLANTIS – PART 2 | ACTIVATING THE CRYSTAL, THE NEW TEMPLE OF TELOS, AND ADAMA’S MESSAGE ABOUT TWIN FLAMES

LEMURIA AND ATLANTIS – PART 2 | ACTIVATING THE CRYSTAL, THE NEW TEMPLE OF TELOS, AND ADAMA’S MESSAGE ABOUT TWIN FLAMES 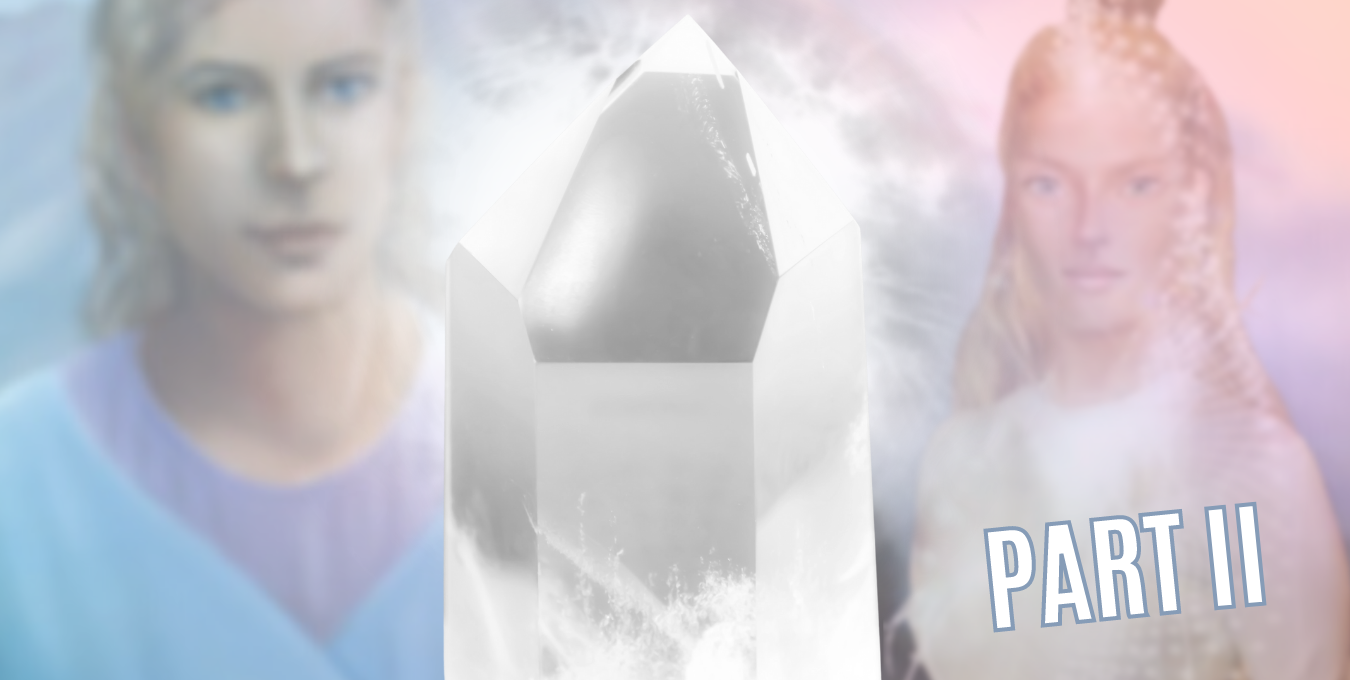 On part 1, I spoke about a vision I had while working with lemurian quartz crystals about a divine feminine and masculine gathering that took place. This gathering was sort of the sacred, divine union of feminine and masculine polarities. It was beautiful! I also dived into my astral or consciousness trip to Atlantis and Telos. Read more about that here!

In this post, we are diving into more information I was able to download or access during another meditation. This took place a day or two after I first had the vision of the gathering and Lemurian-Atlantean crystal. So let’s dive in!

So, because of my own curiosity, I went back to Telos to see and work with the crystal. When I was there, I could see a woman approaching my location, and immediately I could feel bad energy. Her face showed infatuation for the crystal but in a very creepy way. Human-like. She honestly looked normal. It kind of seemed like she was hiding, perhaps waiting for someone to work with the crystal to get a glimpse? Anyway, as I felt her getting closer to me and the crystal, I looked at her and asked…

She didn’t answer my questions. She kept moving forward with her eyes wide open and, again, a very creepy smile. This is when I realized she was not there to help or with good intentions, so I activated my angelic light, manipulating my Merkaba to elevate my vibrational frequency, and as soon as I did this, the light reached her and disintegrated her “body.” NO thing or being that is lower than your vibrational frequency can be near your light because they simply are not in alignment, they’re not a match. So, she simply didn’t handle the energy I was emitting.

I then telepathically reached out to Adama, the Telosian High Priest, and asked him to join me because, uhm, I needed answers. lol

Adama arrived and, when I asked about the woman, he said that beings come to the crystal out of curiosity, but none can activate it because they don’t know how to work with it. Now, curiosity is good, but some beings do have bad intentions. They show up wanting to retrieve the information within the crystal, and others seek to control the crystal, hoping to advance their own selfish agendas.

I feel that the woman I saw was simply a curious being. She may have been there simply trying to see what I was doing. But, still, no good intention. I didn’t get good vibes. So, I feel protecting the crystal and myself was a good call.

The crystal carries the Atlantean and Lemurian history. It existed in both continents at one point, and so, within it are frequencies, coding, with records of the ancient civilizations. I feel this is meant to mend the disconnection of polarities. Heal the feminine and masculine templates. Assist with the integration of energies which will then lead to ONENESS consciousness on the physical Earth plane. This crystal is highly connected to the Earthly experience, not necessarily with the reality or Telosian experience.

I was able to work with the crystal and activate more of its technology. At one point, I felt my counterpart showing up in his light form. We merged and entered the crystal. It was wild! While inside the crystal, it felt like, in a way, our light bodies, higher selves, were making love. The feminine and masculine polarities merged, becoming ONE.

Once more of the crystal was activated, I could see the area around us changing. It was dull, like a cave, but after the activation, it lit up. It was much brighter. Adama said that the crystal, once fully activated, will become another one of their crystal temples. “It’s already in the process.”

Now, I definitely feel this crystal is connected to the twin flame template. Like I shared in part I, I’ve been working a lot with merging my own feminine and masculine energies, which led me to this point, to the remembrance of this Lemurian-Atlantean connection and crystal. It really is no coincidence. I was able to access this information because it is finally time. I am ready. We are ready.

What I feel is that the twin flame souls currently walking the earth with their counterpart are entering a period in their connection that is expediting healing within the collective. Now, you can be in separation, minding your own business, focusing on loving and healing yourself, and that is perfect! This is what is creating this massive shift! You holding the vibration of love and compassion for yourself and others, including your twin, is allowing the convergence of polarities.

ADAMA SPEAKS | THE POINT OF CONVERGENCE

“After the fall of Atlantis, the Lemurian farequencies that existed on the physical land of the Earth went down with it.

At this point, Lemuria had already “collapsed,” and our hope was to maintain some sort of balance or physical connection to the feminine principle, the God(dess) aspect of our Creator, by leaving behind this crystal. There were many crystals dispersed across the Earth, but this one, in particular, was moved to Atlantis to help the rising masculine maintain connection to the feminine, or at least, remember her existence.

I am not talking about men and women, but energy.

Me: Who moved the crystal to Atlantis?

Adama: We did with the help of ascended masters. The priestesses of Atlantis working with this crystal were souls that once lived in Lemuria. They understood the feminine principle and embodied those divine frequencies.

We learned from our mistakes. We loved this Earth so dearly, gave in to the beauty of love, connection, and oneness, but disconnecting from the masculine aspect of Source created much chaos. One cannot exist without the other, beloved, and our hope, with this crystal, is to remind you of this. Both are equally important, especially on a planet such as Earth.

Me: What do you mean by “the Lemurian frequencies that existed on the physical land of the Earth went down with Atlantis?”

Adama: The beings that migrated from Lemuria to Atlantis. Many surrendered to the will of our Mother and Father. At this point, many had already returned to the zero point and were ready to let go. They understood that it was time. Some, like yourself, left the planet but were separated from their counterparts. This is the point that brought upon the separation of twin flame souls. And this is what you, and many others, have returned to heal.

In truth, the connection has always been part of your experience. This is a bond that has always existed and will forever be. But, the being embodying more of the masculine energy during the fall of Atlantis remained on the continent and sank with it. This was part of their agreement.

^ something similar happened in Lemuria

If a being currently experiencing life on Earth was incarnating with their beloved counterpart (in Lemuria and Atlantis), one lived on while the other got tangled up in the karmic web of the planet, or both moved on from this experience carrying much hurt for the collective.

Now, every single soul has a twin flame, but again, not all were part of the Atlantean-Lemurian “experiment.” So this sort of created or divided the collective of twin flames into those in union and those in separation. The truth is, beyond this realm, all that exists is spirit and your twin flame is forever with you. What is being healed now is the template of separation that originated from the fall of the ancient lands on this planet, on this specific timeline.”

Stay tuned for part 3! I will dive into my experience in the underground city of Pinnacle Mountain in Arkansas where Lemurian and Atlantean beings work with the crystal grids as one collective!

Extraterrestrial Abductions: Why do they happen? Should we be scared?
Hybrid Children: Diego (Healer & Teacher of the Way of the Heart)
White Buffalo Woman - A Message of Peace
3 Crystals To Connect with Mary Magdalene